Since it’s Christmas (more or less), let’s treat ourselves to a colourful @solvemymaths puzzle: 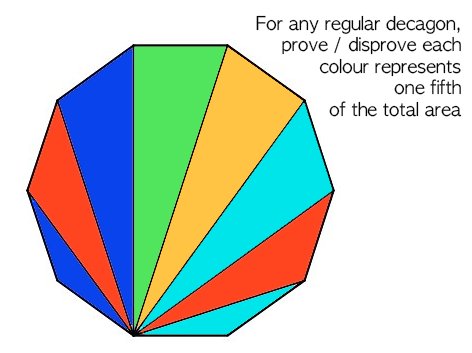 Have a go, if you’d like to! Below the line will be spoilers.

The first and most obvious thing to ask is, is Ed’s claim reasonable? At a glance, yes, it makes sense: there’s a lot of symmetry in a decagon. It’s clear that the light and dark blue areas are the same as each other, and that the yellow and green ones are the same; the red one is the odd one out, but it doesn’t look obviously bigger or smaller than the other areas.

Another observation is that all eight angles at the vertex are equal. In fact, since the interior angle in a regular decagon is $\frac 45 \pi$, the angle in each is $\piby {10}$.

We can also see that the yellow and green triangles are right-angled, although it’s not obvious how much that helps.

Suppose I draw a line from the midpoint of the hypotenuse of the green triangle to its right-angle. That divides the triangle exactly in half (if you conside each half-hypotenuse as the base of the two newly-formed triangles, they each have the same height). The upper triangle is a tenth of the full area (because of symmetry), so the green and yellow triangles both have an area of a fifth of the decagon.

That’s neat! Now we know that each blue-red-blue shape left over has a total area of $\frac{3}{10}$ of the decagon; if a red triangle has half the area of the total dark blue area, or of a yellow/green triangle, we’re done!

We can use a similar trick for the red triangle! Tilting the decagon so the green/yellow hypotenuse is horizontal, and drawing a line from its midpoint to the side of the red triangle that lies on the outside of the decagon, you find the triangle you’ve just drawn has the same area as the original red triangle - the relevant edge is parallel to the hypotenuse. But, as before, that’s a tenth of the whole shape – so the total red area is double that, a fifth of the shape.

And then, knowing we have two-fifths of the shape left over, and that the blue areas are equal, we know that they have to be a fifth of the whole shape, too.

A lovely puzzle! Thanks, Ed, and happy Christmas to all!

How do you estimate the normal distribution for large $z$?

How the Mathematical Ninja estimates logarithms

Secrets of the Mathematical Ninja: Sine and cosine (part II)