Everybody sit down. Dominika has an important announcement.

So…I have a confession to make. Despite the fact that I write maths comic strips, I’m actually a physicist.

Pause for gasps of shock.

Yes, terrible, I know. But physics in general has a little gem that I wish more people knew about – Fermi problems.

The general idea of a Fermi problem or Fermi estimate is to get a rough idea of something while you have very little data – it’s the stereotypical ‘back of the envelope’ calculation. This makes it perfect for answering silly but entertaining questions.

About a year ago, I was reading a paper from CMS about the Higgs discovery, which likened the process to ‘finding a needle in a haystack’. Ignoring the fact that any self-respecting physicist ((*eyebrow* - Ed. )) would have that needle out faster than you can say ‘magnetism’, this got me wondering: if we take this analogy literally, how big would the haystack be, assuming one Higgs needle?

The paper had 12 observed events which were possible Higgs decay events, and reported the LHC’s integrated luminosity as 23 inverse femtobarns ((Barns are an area unit equivalent to $10^{-28} \unit {m}^{2}$, which is approximately the cross-sectional area of a uranium nucleus. According to Wikipedia, nuclei are a big target, so even someone who “couldn’t hit the broad side of a barn” would hit them - hence the name. Entertainingly, a microbarn is called an ‘outhouse’ and a yoctobarn is called a ‘shed’.)). Some authorities say that looking stuff up in Fermi problems is cheating, but since the paper sparked the idea, let’s use only the information in it. Let’s also say no calculators, since we only want a rough estimate ((Also, the Mathematical Ninja would never forgive me otherwise.)).

Setting up the parameters

The first thing we need to find out are how many bits of hay our haystack would have. In terms of the physics, we want to know how many events we’d need to observe to see one Higgs production event. We can find the number of collisions from the integrated luminosity ($L$), which is defined as $ L= \frac{N}{\sigma}$, where N is the number of collisions and $\sigma$ the cross-sectional collision area.

Not having $\sigma$, we need to estimate it! We can tackle this in several ways, most of which hinge on comparing what we want to find to something we know. How about the definition of a barn? It’s the cross-sectional area of a uranium nucleus, which has 238 nucleons about the size of a proton.

Now, I don’t know much about haystacks, but that sounds pretty big.

But it’s probably not perfectly packed. I know absolutely nothing about how hay packs, so let’s just guess. Let’s say each bit of hay takes up 10 times more space than it would if perfectly packed ((No, I did not just pick that because it was a nice number. What could have possibly made you think that?)). This gives us a final volume of $1.8\times10^{8} \unit{m}^{3}$.

This doesn’t sound at all dangerous

For reference, The Shard in London is just over 309m tall. 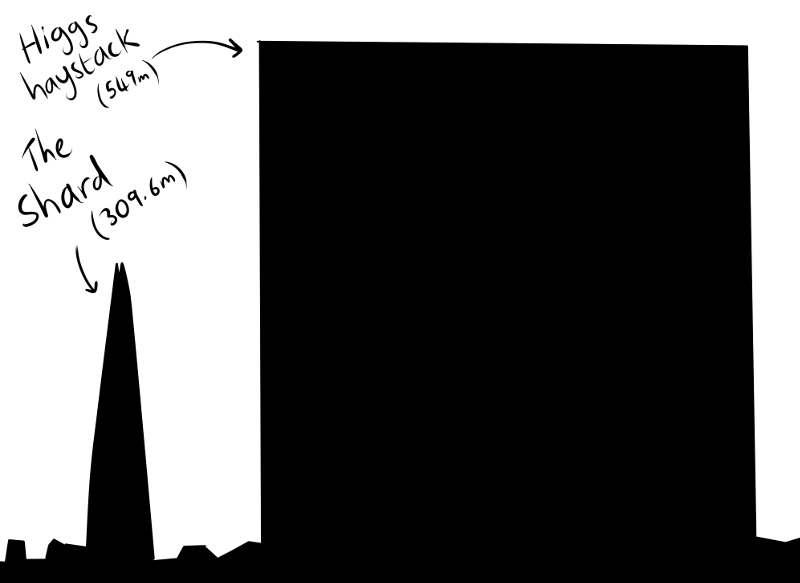 Our final values are unlikely to be 100% accurate – just hitting the right order of magnitude would be great! And everyone will come up with slightly different estimates based on their prior knowledge. But one of the powers of Fermi estimation is that it shows you how to improve your value, and what information you’re missing, without stopping you from progressing. For example, I could do more research on hay packing, or look up the LHC’s proton-proton cross section to get a more accurate value.

They’re also REALLY FUN - and you can do them ANYWHERE. Stuck in traffic? Vent your frustration by estimating the power of the laser needed to melt the cars in front of you. Bored outside? Figure out how many pens you’d need to draw a straight line from where you are to the moon. Whenever you next think ‘I wonder…’, no matter how silly it may seem, try and estimate it. You’ll be surprised at how close you can get.