Before I begin: this post involves a puzzle and my attempt at a solution; everything above the horizontal rule is spoiler-free, but go beyond that at your peril.

Some days, you can almost hear @colinthemathmo’s chuckle as he innocently poses a question such as:

Find all configurations of 4 points in the plane that define exactly two distances.

and follows up with comments like “are there more solutions?”, “everyone always misses one” and “The challenge now to to convince yourself - and others - that you have them all. But do you … ?!?”

His business card reads “confuser of children and torturer of adults.” But of course it does. He also runs the annual Big MathsJam gathering ((it’s not a conference; it’s not a lecture; it’s more of a confiture)) which has just finished.

Beyond here be spoilers

I attacked this by splitting the possible arrangements of points up into exhaustive cases.

Without loss of generality, let the longest side $OA$ be of unit length, and the remaining points be $B$ and $C$. Note that we need exactly two distances to show up between the points; in any case, it’s impossible for there to be only one, as that would define a tetrahedron. 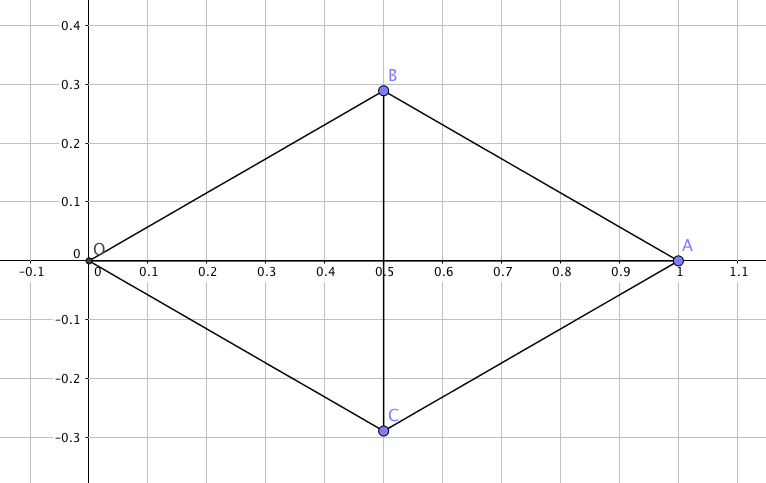 This case splits into two distinct cases: one where (without loss of generality) $OA$ and $OB$ are the unit length sides and one where $OA$ and $BC$ are.

Point $B$ must lie on the unit circle centred on $O$, and point $C$ must lie on the perpendicular bisector of $OA$. $CA=CB=CO=AB$, which makes $OAB$ an acute isosceles triangle with $C$ at its circumcentre, forming an equilateral triangle inside. In this case, $x = \frac{\sqrt{2}}{1+\sqrt{3}}$. 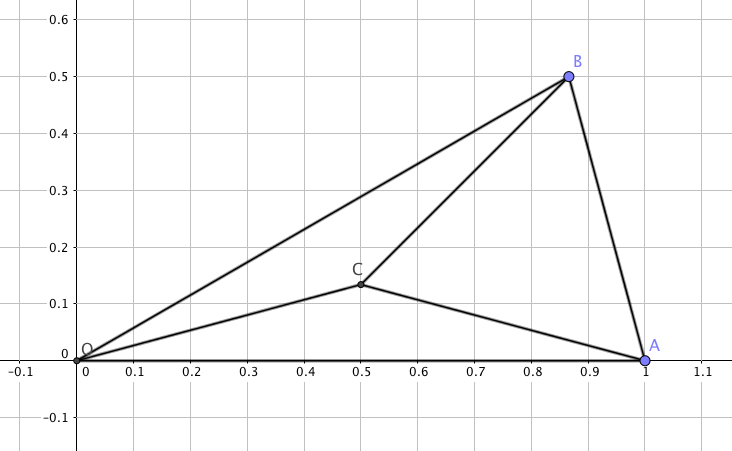 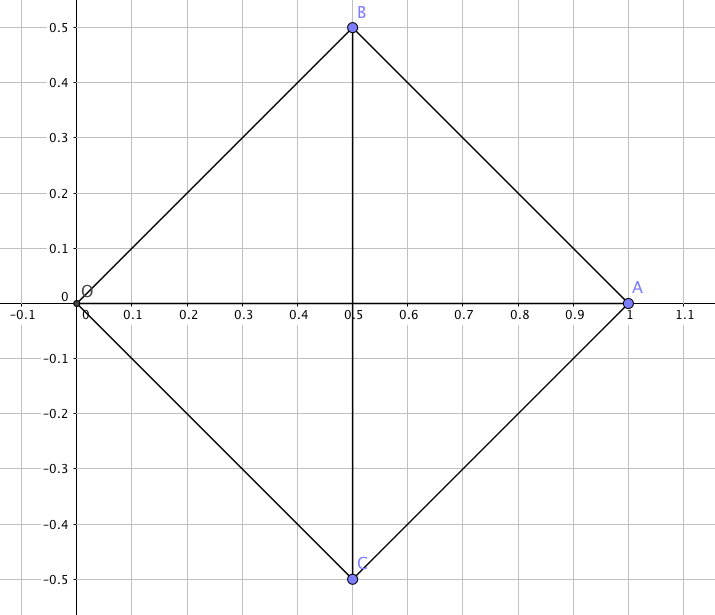 This case splits into two distinct cases: one where $OAB$ is an equilateral triangle, and one where $OA$, $OB$ and $BC$ are the unit sides.

If $OAB$ is an equilateral triangle, the fourth point is its circumcentre, and $x=\sqrt{3}$. 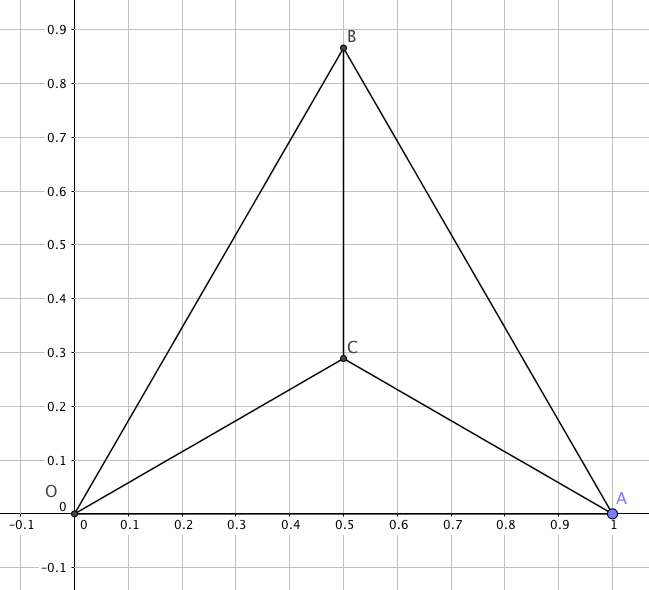 (Note: without loss of generality, one of the vertices must abut two of the unit edges; let that point be $O$). 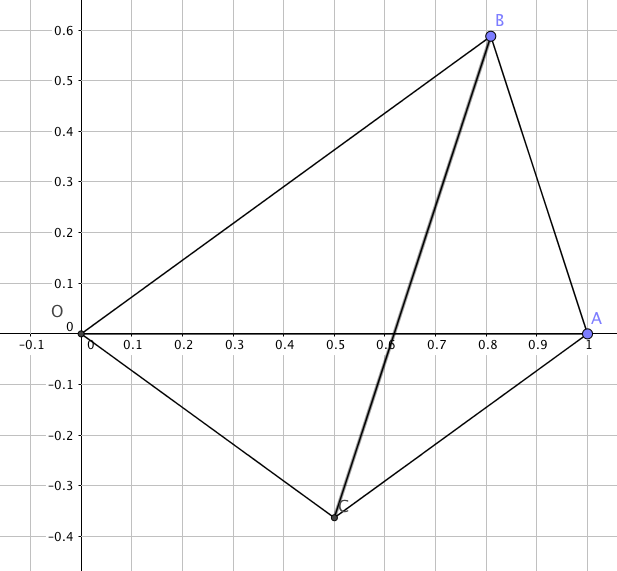 The two short sides could (in principle) be $AB$ and $AC$ or $AB$ and $OC$. Considering these cases separately: 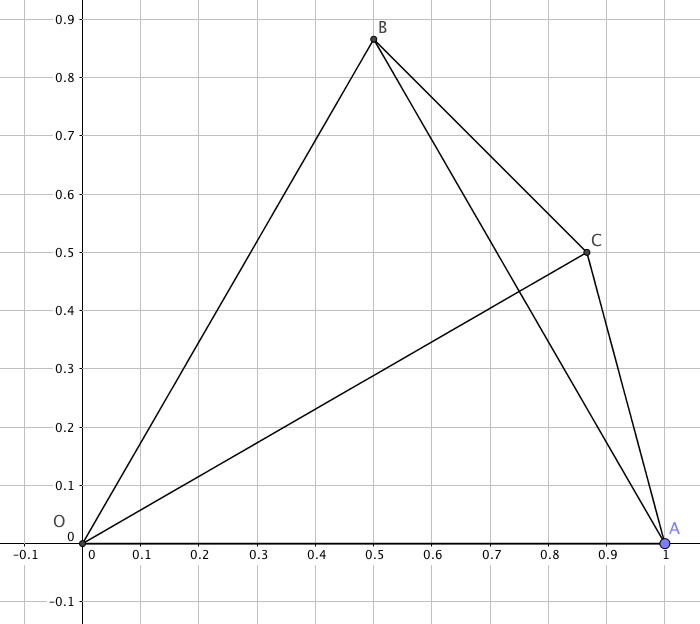 Interestingly, this is similar to case 2a) in the sense that $O$ is the circumcentre of isosceles triangle $ABC$.

$OACB$ forms a rhombus of side 1. At least one of the diagonals of a rhombus is larger than the side length, so this case is impossible.

Without loss of generality, let $OC=x$. $OACB$ is a rhombus with side length 1. As with case 4b), at least one of the diagonals would be larger than 1, so this case is impossible.

I thought I had finished, but @realityminus3 (always one for thinking outside the box) pointed out there was nothing to stop one of the distances being zero. That adds three further configurations:

These feel somewhat like they’re cheating, but there’s nothing in the rules to preclude them.

There are six non-degenerate arrangements of four points in the plane that define exactly two distances:

There are three further solutions if coincident points are allowed:

However… for all that I’ve convinced myself there are only nine, I’m open to being told about more!

Colin has also written up a proof which - thankfully! - agrees with mine.