Having Elegant Radius Or Not?

Hi, HERON, and thanks for your message!

It turns out that yes, the incircle of a Pythagorean triple always has an integer radius. The key to the problem (for me, at least) is the equal-tangents theorem. 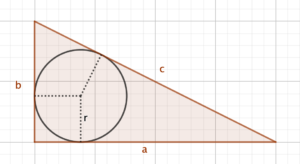 Looking at this diagram, you can see that the two tangents that meet at the right angle must have length $r$.

Because two tangents meeting at a point have equal length, the upper-left portion of the hypotenuse must also have length $b-r$, and the lower-right portion also $a-r$.

This isn’t quite enough: we still need to show that $a+b-c$ is even!

The Mathematical Ninja and the Power of Ten

Secrets of the Mathematical Ninja: Taylor series and the product rule

How to do calculus with $a^x$