It’s not that it’s tricky to solve it - it’s just… fiddly. Let’s start by drawing the graphs. The right-hand side is easy enough: it’s a straight line with gradient 1, through the point $(0,-4)$. The left-hand side is trickier, and let’s go through it in detail, using the graph-sketching rules: DATAS.

T is for turning points: luckily, it doesn’t have any.

A is for asymptotes, and it doesn’t have any of those, either.

S is for shape: the square root graph normally goes up and to the right, getting gradually shallower. The right-hand branch does that; in the second quadrant ($x \le -3$), it does the mirror-image, going up and to the left. 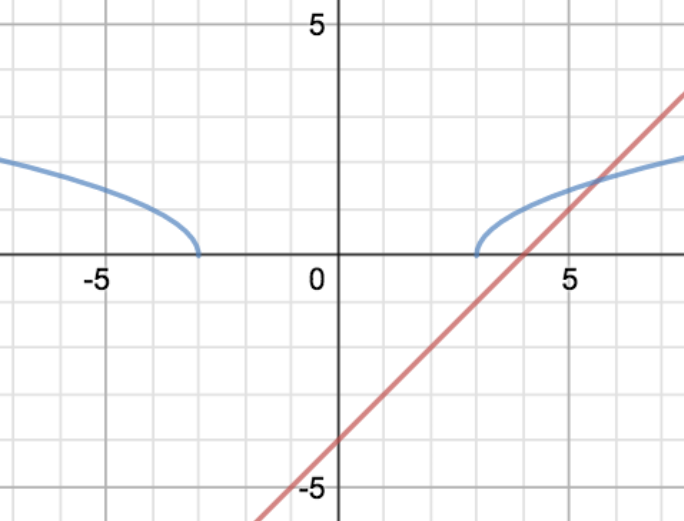 Right, good. Now, where is the curve above the line? Obviously, everywhere in the left-hand branch is good, so the equation holds for all $x \le -3$. On the right, the curve starts above the line (when $x=3$, the curve has $y=0$ and the line has $y=-1$), but eventually the line and the curve cross. Where? Well, we need to solve for that. $x$ is positive, so we can ignore the modulus signs and solve:

That doesn’t factorise, so let’s use the formula:

Two answers? That doesn’t fit with the graph. One of them doesn’t make sense, though: when $x=3.382$, the line is below the $x$-axis, so that’s not a valid solution to our original question.

That’s a really nasty modulus inequality question, which - had we not drawn the graph and thought about which answers made sense, we’d have been in all kinds of trouble. Notice also that, even though the original inequality was strict (<), the final inequalities are partly inclusive ($\le$), because of the nature of the square root function.

The Sneakiest Integral I've Ever Done

The Mathematical Ninja and the Tangents Near 1