“That looks straightforward,” I thought. “I’ll keep on looking at this geometry puzzle.” Nut-uh.

A standard pack of 52 cards is shuffled. The cards are turned over one at a time, and you guess whether each will be red or black. How many correct guesses do you expect to make?

I’m going to present a neatly tidied-up answer after the line, but it’s worth mentioning that this was far from the first method I came up with.

It’s good to start with an upper and lower bound for the answer.

I think a lower bound is 26, because whenever there is an imbalance in the reds and blacks, which is at least half the time, you have a better than 50-50 chance of picking correctly.

As for an upper bound, I would reason that the more cards you have, the smaller your percentage correct will be, and if you have two cards, you would expect 75% - so an upper limit would be 39 cards. Where did the 75% come from? Read on.

Paths on a lattice: 2 cards

Two big elements of my problem-solving practice are:

So, I drew out what started as a probability tree for the two-card situation: 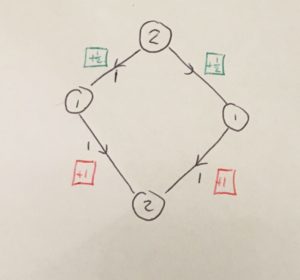 Only it became a lattice. Assuming I choose randomly when I have an equal number of cards left, I get half a point (on average) from my initial guess, and then I know what colour the remaining card is and get a point for that. I score 1.5 points for each path, which is my expected score.

Paths on a lattice: 4 cards

With four cards, the lattice becomes more complicated: there are $\nCr{4}{2} = 6$ paths through the grid, and I think it makes sense to count how many go through each point.

The six paths split evenly between the two following nodes, in each case leaving one card of one colour and two of the other. So a third of the time, you’ll guess wrong and go to a 2-0 state, and two-thirds of the time you’ll come back to the two-card case.

And here we start to notice something: every time you move towards the central column of nodes, you get a point. When you move away from it, you get nothing - except when you’re moving directly off of the column, in which case you get half a point.

Adding all of this up gives 17 points from six paths, or an expected score of just under 3. 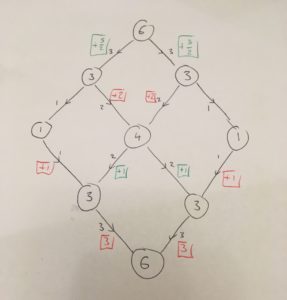 Paths on a lattice: 6 cards 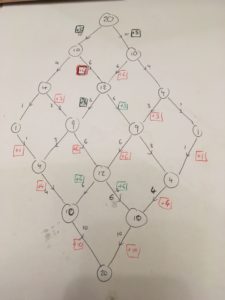 In the two-card case, there were four visits to the diagonal (although we ignored the concluding two).

In the four-card case, there were sixteen, and we ignored the final six.

(In fact, it is - but I have only proved it by looking it up on OEIS rather than doing sums. There’s a challenge for you!)

Putting it all together

I might have known to expect you, sensei! Is that a dagger made of silver?

Seems impractical. Oh wait! Is that a hint? We could use Stirling’s approximation to make that nicer, couldn’t we? Spelt differently, though. But… yes, you’re absolutely right, just move the dagger away from my neck and nobody gets hurt. Especially not me.

“I agree with that.”

The Mathematical Ninja and the Cube Root of 13

A strange number base