Ever since I’ve been teaching GCSE maths, I’ve struggled to explain one topic more than any other: how to find a centre of rotation.

There are several ways students approach this problem. There’s the “I dunno” way, sometimes disguised as “I dunno where to start.” This is the kind of comment that makes me wonder whether the student is making an effort at all.

It really doesn’t take that much effort to be in the second group, which says things like “Is it sort of twisted?” That’s not going to pick up many marks, but it shows a little bit of thought about the question.

The third group uses the right vocabulary, and says “It’s a rotation!”, confidently picking up one of the three marks. Some will even say “90º ((Degrees are rubbish, but they’re what the syllabus asks for)) clockwise” (or something similarly correct) for a second.

It’s the final mark that’s the problem: how do you find the centre of rotation? Obviously that’s straightforward if it’s a 180º rotation, but 90º presents a difficulty.

There’s a fourth group that calls for tracing paper and sets off on a dull process of stabby trial and improvement to find the centre. I have sympathy for this group; they generally pick up the marks, and that’s a Good Thing.

But it’s a bit unsatisfying for me, as a tutor, to recommend “tracing paper stabbity” as a method. Luckily, there’s a better way — and it involves one of the least-used tools in the geometry set: the 45º set square.

Here’s what you do 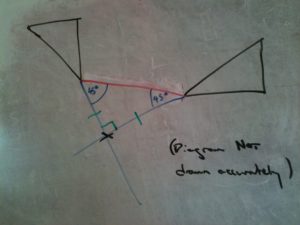 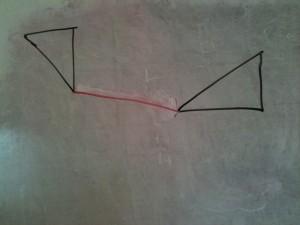 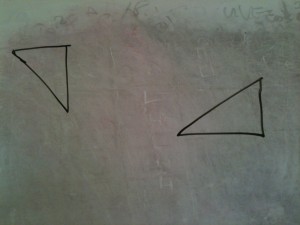 Why does it work?

Generalising to other angles

In likelihood, you’ll never need to find a centre of rotation outside of a GCSE exam, and by that standard 90º should be enough for anyone. But, just for the sake of argument, what if you had to find the centre of a 32º rotation? You can use the same principle: you need to build an isosceles triangle with 32º at the tip. You’ve got 148º left in your triangle, which need to be split equally between the other two angles: you’d draw lines at 74º to your original line.

How the Mathematical Ninja approximates $\sin(55º)$

Ask Uncle Colin: How do I multiply big numbers together?

How the Mathematical Pirate works out the high times tables

Secrets of the Mathematical Ninja: Sines and cosines near 45º