I thought, until I looked closely, that we had a Hoberman sphere in the children’s toybox. We don’t: we have something closely related to it, though.

The Hoberman mechanism comprises a series of pairs of pivoted struts arranged end to end. Each pair looks a little like a pair of scissors: if you move any of the ends, the whole mechanism folds in to make a star, or out to make something more circular. It’s mesmerising! (Click on the image if it doesn’t play immediately.)

The Hoberman sphere takes the mechanism, quite literally, to the next dimension: by attaching six Hoberman mechanisms together, the edges form an icosidodecahedron. (That’s 32 faces: twelve pentagons and twenty triangles, a fascinating shape in itself!) Each mechanism forms a great circle of the shape. Now, all linked together, moving the struts relative to each other makes your shape more or less like a sphere or a star. 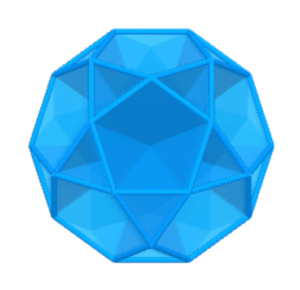 The one in our toy box is a less interesting shape – rather than an icosidodecahedron, it’s a faintly boring 24-hedron: 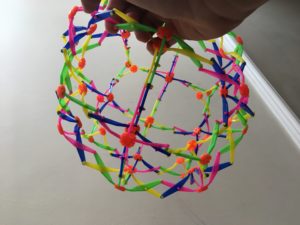 Why are they interesting?

If I had to tell you, you wouldn’t understand.

Chuck Hoberman was born in Cambridge, MA in 1956, and works at the boundary of art, engineering and architecture. As well as the Hoberman sphere, he’s behind several fascinating toys, including the twisty puzzle BrainTwist and the Hoberman Flight Ring, a kind of Frisbee that folds up small.

The Mathematical Ninja and the Poisson Distribution