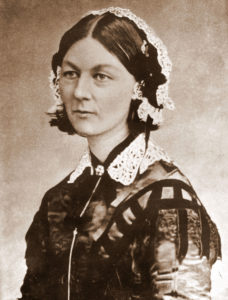 A Mathematical Ninja? Surely Nightingale was just a nurse? Wandering about with a lamp?

Well, no. For several reasons, no. First up: there’s no such thing as ‘just a nurse’. Especially not in the crowded field hospitals of the Crimea. More to the point, Nightingale was a leading light ((pardon the pun)) in getting the hospitals set up in the first place.

And how did she persuade the powers-that-be that field hospitals would be worthwhile? She used a graph. 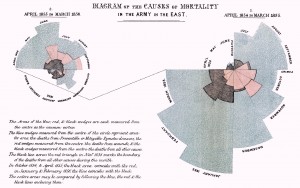 Nightingale’s graph of causes of mortality in Crimea.[/caption]

It’s one of the most important graphs in history (I reckon). It showed the military top-brass, in no uncertain terms that the battlefield deaths (the red bits) were vastly outnumbered by soldiers dying of infections and other preventable diseases. Having hospitals near the battlefields would obviously lead to fewer soldiers dying - and keep the army stronger.

Nightingale kicked ass, using the forces of statistics, courage and personality to persuade the army do things her way. There aren’t many people who could say that; Florence Nightingale (1820-1910) was a mathematical ninja of the highest rank.

* There is a Florence Nightingale Museum at St Thomas’s Hospital in London, near Westminster Bridge.