Ask virtually any maths teacher what $\sec(\alpha)$ means, the chances are they’ll say “it’s $\frac{1}{\cos(\alpha)}$,” without missing a beat. Ask them what it means geometrically… well, I don’t want to speak for the teaching profession as a whole, but I’d have been stumped until the other day.

As with the bulk of geometry, it’s all to do with circles and triangles. In fact, you can ((I’d argue that you probably should)) define $\sin(\alpha)$ and $\cos(\alpha)$ using a circle and a triangle, too, which is where I’ll start ((I’m going to grit my teeth and use degrees in this post, or else I’d need to fiddle with the settings in Geogebra.)) : 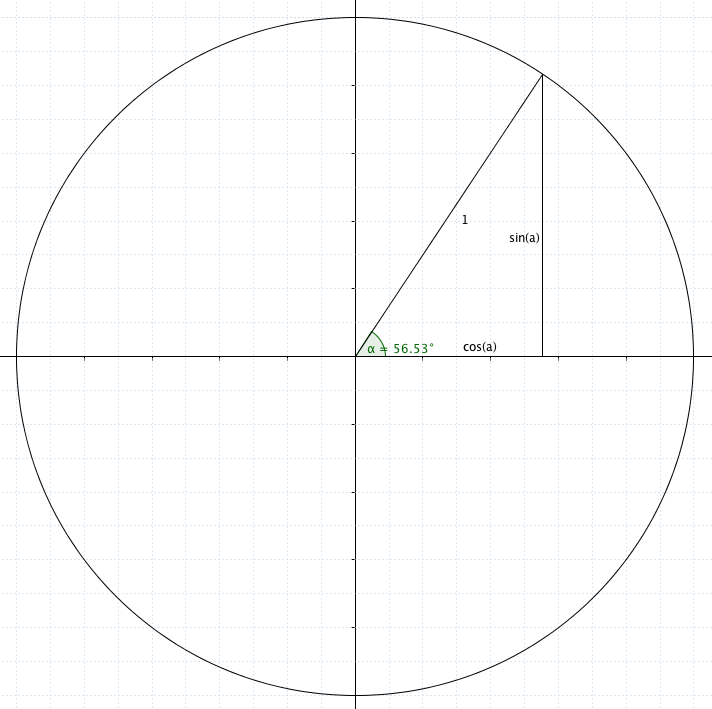 Draw a radius on a unit circle anywhere. From the point where the radius meets the circle, draw a vertical line to the $x$-axis, and complete the triangle by going horizontally back to the origin. Hooray, triangle. It’s got an angle at the centre, and - if you remember your GCSE trig - you can say that the opposite side (the $y$-co-ordinate of the point on the edge of the circle) is $1\times \sin (\alpha)$, while the horizontal distance (the $x$-component) is $1 \times \cos(\alpha)$.

But what about $\sec(\alpha)$ and all those other things?

Well, the secant function - $\sec(\alpha)$, as it’s usually known - comes from another triangle, and it’s easiest to explain starting from a tangent. Unsurprisingly, the tangent to a circle is closely related to the tangent function, $\tan(\alpha)$.

If you take the same circle and radius you had before, and draw a tangent to the circle there, like this: 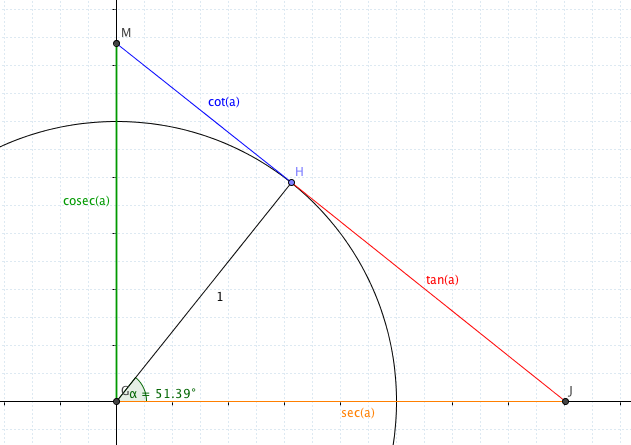 The secant is defined as the distance along the $x$-axis from the centre of the circle to where the tangent meets - and again, you can ask Pythagoras to check that $\tan^2(\alpha) + 1 = \sec^2(\alpha)$.

Ask Uncle Colin: Where Should I Send Charitable Contributions?

Free for all Friday