Gosh, who would have thought it? 15,000 students (at the time of writing) have signed a petition to get EdExcel to change the grade boundaries for Thursday’s non-calculator GCSE paper.

Good luck with that. The boundaries will have been set using magic statistics, and either have been or will be scrutinised by OfQual.

This blog isn’t about grade boundaries, or (for that matter) about entitled whining. It’s about Hannah and her sweets, a question that seems to have become the lightning rod for complaints.

My position: Hannah’s sweets question was perfectly fair, and ((pseudocontext aside)) I’d go so far as to call it a good question.

The question (I paraphrase) was:

This is question in the high teens/early twenties, so about 80% of the way through the paper; if I were in the habit of attaching grades to questions, I’d put it towards the top end of the A-grade questions, so it’s not supposed to be a walk in the park.

Had the question given Hannah, say, 6 green sweets out of 15 and asked the probability of getting two green sweets, a student expecting an A would almost certainly work out $\frac{6}{15}\times \frac{5}{14} = \frac{1}{7}$ without any serious problems.

Why it’s a good question

That jump from ‘working with explicit numbers’ to ‘working with unknown numbers’ is, I would say, one of the key indicators of whether a student is cut out for A-level. It’s not (as some students have grumbled) an A-level question – to me, it’s quite a natural combination of algebraic fractions ((which you revised the hell out of, right?)) and probability ((which you knew was going to come up)) and I’m surprised there aren’t more questions of this nature in GCSEs.

The only one I’ve been able to find, though, was from the 2004 paper, which I’ve put here for the sake of comparison. 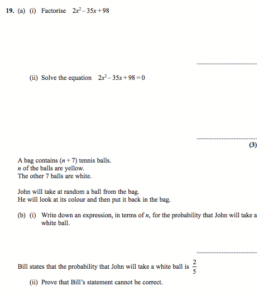 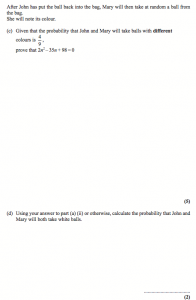 Edited 2015-06-06 to change balls back to sweets. Thanks to @MeganGuinan1 for the correction.