For the first time anyone could remember, the Mathematical Ninja trembled with fear. He’d pulled his scary face, and it hadn’t worked: Victoria Coren Mitchell had simply said “you don’t scare me” and he had no idea what to do next.

“It’s time for the wall game,” she said.

“Right,” thought the Mathematical Ninja, in a bit of a fluster. “I can’t think straight… I’m going to have to guess, and guess fast.”

In Only Connect, the Wall Game consists of 16 tiles, which can be arranged into four groups of four, like this: 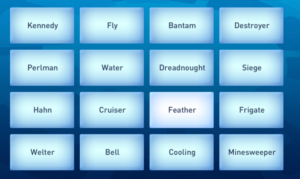 You have two and a half minutes to put them into the correct groups - but once you have two groups right, you only have three more chances to sort out the last two sets.

Trouble was, the Mathematical Ninja had absolutely no knowledge of anything apart from maths and weaponry - and only one of those was going to help him here.

The power of randomness

He didn’t much like those odds - but how about if he lucked out and got the first one?

So what’s the probability of winning the Wall Game by guessing? It’s complicated, because there’s no easy way to tell when you’ll complete each stage. However, we have machines for that sort of thing.

The probability of winning the Wall Game by guessing one combination a second, then, is somewhere around 0.8 or 0.9% - somewhere about one in 120.

The Mathematical Ninja paused for a second, and whirred his fingers over the board.

* You can play Only Connect here.