This is a guest post, courtesy of @Dragon_Dodo and @FennekLyra. Thanks, Dominika and Eva!

It was an unusually quiet morning at the Maths Police HQ.

‘If a mathematician is a device for turning coffee into theorems, what do you reckon the conversion rate is?’ mused agent Dodo over her morning cup of coffee.

‘Probably not too good!’ chortled Lyra, ‘You’ve seen how many cups Constable Beveridge gets through!’ There was a brief pause in the conversation as they both grinned and glanced over to Beveridge’s desk, which was barely visible beneath the multiple coffee cups strewn across it.

Of course, Constables Gale and Beveridge were nowhere to be seen, having run off earlier yelling something about uneven y-axes ((This was why the place was so quiet)). A tiny but stern looking koala had been left to look after the office, but had promptly fallen asleep.

‘Well, let’s say the average coffee keeps you up for 4 hours. Even with that much coffee, you’d still need to sleep… 4 hours? 8 hours?’

Lyra was instantly suspicious. ‘Are you just picking random sleeping times so that the working day length divides exactly?’

Dodo shuffled a bit and mumbled something about only needing an estimate ((Good enough for physicist work!)).

‘Fine then!’ muttered Lyra, ‘Let’s assume they like to sleep on problems and give them the longer time. If we’re taking 16 hours of thinking into account here, that gives a rate of 4 cups a day. But how long does it take to come up with a theorem?’

‘I…have no idea’. Dodo absentmindedly fiddled with a pen for a second, then wandered over to her desk, took a long draught of coffee, and started calculating something.

‘Psst, Dodo. Guess what I found this morning while Gale was showing you magic tricks?’

‘Your tiny dinosaur creature that I hid inside one of your socks?’

‘You-did-WHA-?!’ Lyra breathed deeply to steady her anger. Revenge was a coffee best served cold. ‘Anyway, I found a graph that Beveridge and Gale seemed to have overlooked!’

‘They were pretty distracted earlier… anyway, what is this sinful graph?’

Agent Lyra, still grinning, slid the paper across the table upside down, then bolted behind her desk and hid just before Dodo turned the graph over. 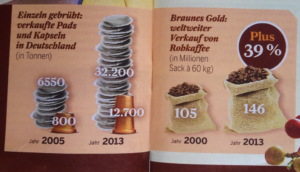 And just as well. The resulting shower of angrily thrown pens rebounded off every available surface with a coefficient of restitution of about 0.7.

Then…silence. Lyra slowly raised her head above the level of the desk to see what was going on.

The sight that met her eyes was puzzling, to say the least. Dodo was still scribbling away on the back of a napkin. At the sound of Lyra’s puzzled ‘huh?’ she looked up and grinned.

‘I have to retain some dignity. I am a physicist, after all! But this graph is dreadful!’

Lyra cautiously crept out from behind the desk. ‘It is pretty awful, isn’t it!’.

‘Mmhmm. The bags of coffee beans seem ok, but the pads are way out of proportion. How did that lie factor thing go again? Ratio of size it should be to actual size?’

‘Yeah, I think that’s it. So that gives a lie factor of about 8 for the coffee capsules?’

‘And about 2 for the coffee pads. We’ve seen worse, but this is COFFEE we’re talking about! IS NOTHING SACRED ANY MORE?!’ Dodo paused for a moment to control her breathing before continuing, ‘If they wanted to do a nice pictorial graph, choosing those little capsules for it wasn’t very smart!’

‘Yeah, you can’t have half of a capsule! Well, you could, but all the coffee would spill out.’

‘That would make them about as useful as this graph’ muttered Dodo darkly.

Lyra slowly backed behind her desk again. ‘Oh, and look at where they’ve put the numbers!’

‘They’ve put the 6550 ON TOP of that bar! That makes it look bigger than it is, exaggerating the effect of the lie factor!’

‘And- wait a minute! They’re comparing tonnes to millions of sacks of 60kg! This just gets worse the more I look at it. What even is their motivation behind this?! Are there beverage elections in Germany?’

Lyra was quiet for a moment. ‘Oh, not BEVERIDGE elections. I was just imagining Constable Beveridge in charge, heh. It was in a TV brochure, in an article about coffee! You’d think they’d know better. The article was about coffee quality and how people are using the pads and capsules more than the actual coffee beans.’

‘It doesn’t make any sense, though. Surely having the graph with the right proportions would back up their point better?’

Dodo sighed. ‘Looks like we have a case of mathslaughter! May not have been intentional, but ignorance won’t save them. I mean, if you’re going to go to the effort of making a graph, at least do it properly?’

Lyra nodded. ‘I’ll just go write up the case report on this. One of the higher-ups can write them a letter of warning.’

‘Mmhmm.’ Dodo was engrossed in the mysterious calculations again. Lyra shook her head in bewilderment and wandered over to her desk.

Constable Gale was _no_t a happy bunny. Their case had turned out to be a wild goose chase, and he was sopping wet.

And when he entered the office, dripping great British weather all over the carpet, an even more unwelcome sight met his eyes. Suddenly, all the whispering Beveridge and Dodo had been doing that morning made perfect sense.

It wouldn’t have been so bad if it was only one pulley. But, no. Gale’s desk was hanging from the ceiling in an arcane web of pulleys, see-saws and hanging counterweights. Pulleys…held up by other pulleys. Inclined planes supported by other inclined planes. Not even the most evil mechanics exam paper writers would have thought of this monstrosity.

Taped to the front was a note in Beveridge’s angular handwriting:

‘What’s the probability of unpicking all this, statto?’

The smug fistbump being exchanged in the corner of his vision did nothing to improve Gale’s mood.

How to remember which way the skewness goes

Fibonacci kilometres: how the Mathematical Ninja converts (and how mere mortals can, too)