As I happened to be in London last week, I took an afternoon to visit the Science Museum and, especially, the Winton Gallery exhibit on Mathematics.

Maths! In the Science Museum! What a treat! Or so I hoped.

There’s a bit in Surely You’re Joking, Mr Feynman where the narrator is horrified by a physics textbook that repeats, zombie-like, “Energy makes it go.” That’s roughly the feeling I had in the maths exhibit: the number of displays saying “mathematicians used mathematics to [x]” left me feeling a bit short-changed. It felt like a mathematician had been involved early in the drafting phase and anything interesting or insightful had been carefully excised.

Where are the knobs to twiddle and see how the differential equations change? Where are the 3D-printed slide-rules to play with? Where are the pens and paper so you can sit down and mess around with proportion?

And where are the puzzles?

Maths isn’t a spectator sport. Had I not had a reasonable background in maths already, I think I’d have felt not so much like a spectator as someone who’d tuned into the classified results of an unknown sport in a foreign country. (Nacional beat Tondela 3-2, did they? That sounds like a good game, but what happened? Was there drama? Was it a significant match? What happened?) 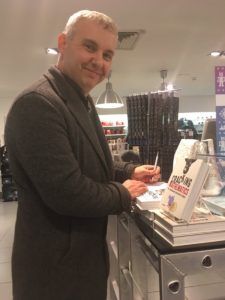 I want to end on the positives, though. It’s a stunning space - the centrepiece of the aeroplane with a depiction of the airflow behind it is gorgeous - and some of the things to look at are intriguing: a painting designed so it can only be appreciated by way of a cylindrical mirror, a how-to-use-an-astrolabe video and a Heath-Robinson water-flowing-through-the-economy machine that must have really impressive when it was turned on.

The nice thing about a maths exhibition that leaves people wanting more, though, is that Cracking Mathematics gives them exactly that, and the gift shop has many copies. I signed some of them. Maybe they’re still there?

The Indisputable Existence of Santa Claus

Look, I write ‘popular’ maths books, and finding the balance between light-enough-to-engage-the-average-punter and detailed-enough-to-please-a-mathematician is really tough. The Indisputable Existence of Santa Claus hits the sweet spot squarely – it’s light-hearted, self-aware, and self-deprecating without being apologetic. It tackles tricky problems of logic, geometry, game theory, combinatorics and Markov chains without shying away from the equations, but without overwhelming the reader in technical detail. (As far as I could see, there were none of the chalk-on-blackboard errors where a well-meaning editor has ‘corrected’ something without checking first.)

If your clueless uncle is bugging you for a gift idea and his budget is likely around a tenner ((supposing, of course, you already have Cracking Mathematics)), I would strongly recommend suggesting The Indisputable Existence of Santa Claus.

* Disclosure: I received a free copy of The Indisputable Existence of Santa Claus for review purposes.

* Photo credit: Thanks to @dragon_dodo.

The smart way to do the binomial expansion (Part II)