Many moons ago, I looked into the game theory of Minesweeper, and - in particular, what you should do in this situation: 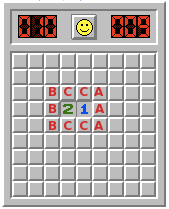 I think I got my probabilities wrong there, and want to put that right.

If you want to work out the correct move (and associated probabilities), you should read no further than the line.

To work out the likelihood of the two-mine situation, I’m going to work out a series of probabilities - or rather, count the possibilities:

I’m not going to work that out: I’m only after the relative probabilities, so I’ll hopefully be able to work out a ratio and cancel it down.

Here, I need the possibilities:

Writing this out in factorial form, we get the probability ratio (two mines: three mines) to be:

That simplifies down substantially even at first glance:

And yet further if we simplify the factorials:

What should you do?

Your best shot at survival is to click one of the three squares on the right. I hope that opens up a few blanks for you!

The maths of the decathlon

The crazy way you have to integrate logs