One of the OTHER things I love about MathsJam is that I always come away with a notebook full of new ideas for posts. Most of them are indecipherable, but some stick in the mind. This one is based on a real-life dilemma posed by a friend of Elizabeth, which I’ve depoliticised slightly:

There’s an election to an influential board of scientists. There are four candidates: a pure mathematician (P), an applied mathematician (A), a statistician (S) and (shudder) a chemist (C). You may vote for up to three of the candidates; the two with the most votes will be elected. 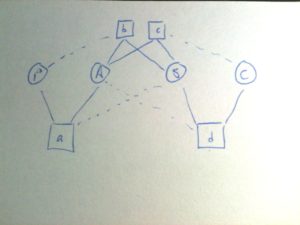 If everyone votes for their two preferred candidates, we end up with one vote each for P and C, while A and S get three apiece and get elected (in fact, this is an acceptable outcome for everyone: everyone has at least one of their favourites and no-one hates any of the candidates).

Could anyone swing the vote from an OK result to a good one? Actually, no: the only people who aren’t fully happy are the extremists (you and the chemist) - and you’ve both already voted for your preferred candidates. The moderates are quite content, thank you: they’ve no reason to vote for either extremist and risk one of their preferred candidates losing.

In that case, the candidates get the following numbers of votes:

In particular, unless there are no moderates at all, A always beats P and S always beats C. The only way an extremist can beat a moderate is if there is a majority of extremists - and whether your pet extreme candidate is winning or losing, it doesn’t make sense to help the candidate you don’t want to win.

Unless, as I said, there are no moderates. In an evenly polarised contest ($a=d>0$ and $b=c=0$), you end up with a tie between all four candidates. In that situation, voting additionally for your least-hated candidate would make sense. This, though, is the only situation I can come up with (under this model) where you would have any reason to express a preference between your two disliked candidates.

Even if you’re a moderate, there’s no circumstance in which using your third vote takes you from a poor outcome to a better one - you’d only ever use it to express a preference between the two extreme candidates, and there’s no situation where both extreme candidates are in the running.

Arrow’s Theorem says there’s no perfect voting system, but I gather preference voting is generally found to be a system that’s easy to understand and that feels fair - even if, in this election, it leads to the election of a statistician.

As Elizabeth’s friend says, you should never vote for someone you don’t want to get in: this model seems to support that excellent guiding principle.

- Thanks to Elizabeth for the puzzle, and to Alisdair, Rob and Francis for the discussion.