”$\sin(15º)$,” said the GCSE student, and the Mathematical Ninja – recognising that the qualification recognised idiotic angle measures – let it slide.

“How do you know that?” asked the student, brightly.

The Mathematical Ninja froze – their spidey senses tingled. Was it a trap? Was the student simply trying to derail the class by getting them to talk about mental arithmetic rather than the lesson at hand? They decided it was a risk they was prepared to take. “Have you heard of Ailles’ Rectangle?” they asked.

The student shook his head. 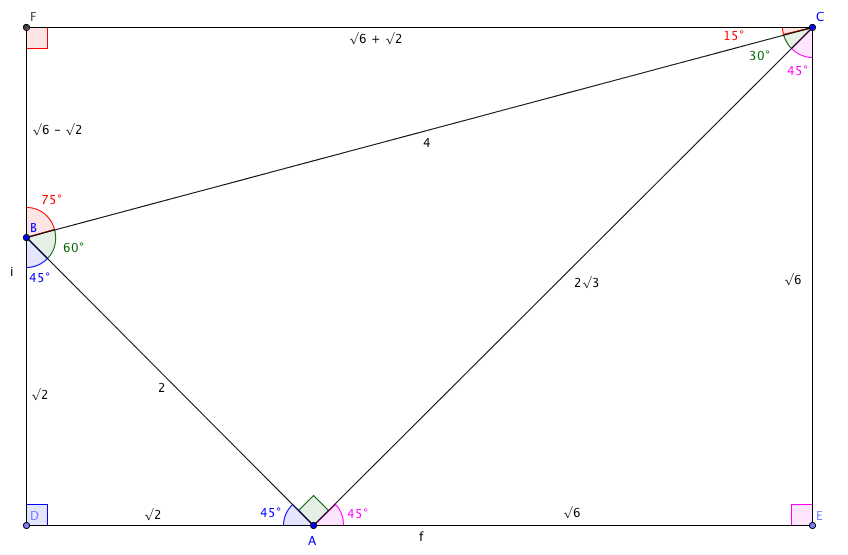 “In honesty, sensei, that doesn’t clear much up for me.”

“Fine, allow me to explain. The triangle in the middle – with the green angles – is half of an equilateral triangle.”

“Right. I’ve chosen a hypotenuse of 4, which will keep the numbers relatively clean.”

“You read that off the picture, didn’t you?”

“Good. And as for the top triangle?”

“I did,” said the Mathematical Ninja.

“But how did you know that?”

“Allow me,” said the Mathematical Ninja, “some mysteries,” as they surreptitiously turned the Wolfram|Alpha app off on their phone.